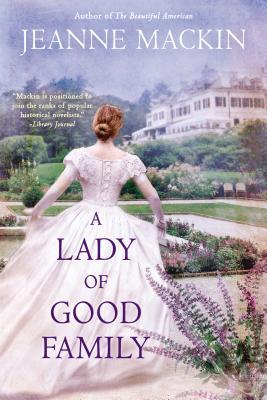 Last week I finished reading a beautifully written, absorbing novel I recently purchased just because a) I thought the cover was beautiful and b) I was in a gardening frame of mind. I was intrigued by the idea of a novel based on the life of Beatrix Farrand, one of the first female landscape architects and the niece of Gilded Age novelist Edith Wharton.

A Lady of Good Family by Jeanne Mackin is one of the few reads I would categorize as truly a five-star-worthy book, and I loved so much about it that I found myself copying down some of the characters’ quotes in one of my notebooks. This passage made me smile:

“What if she used it in a story?” Minnie had said to me when we decided to never openly speak of it. “That would do Beatrix such harm, and much as I love Edith, one should never trust confidences to a novelist.”

Because I am a former journalist, I regularly have people tell me things and then say, “That’s not for publication” or “That’s not for the magazine, by the way.” I left my magazine editor job more than four years ago, so I find it humorous that people still treat me as some sort of quasi-journalist. And maybe they’re on to something because I am far more alert to my town’s goings-on now that I’m working on novels. And yet … what about that bit of dialogue, that “one should never trust confidences to a novelist”? While I certainly don’t intend to ever betray anyone’s trust in me, I most definitely do intend to use some of the real-life people I know to inspire my fictional characters, their virtues as well as their foibles.

Would you trust a confidence to a novelist, or would it depend on the novelist?